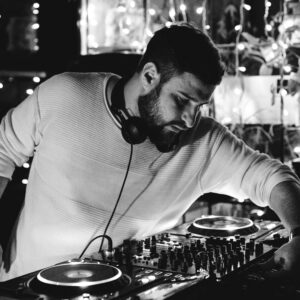 Constantly growing in the local scene, Vlad Bretan is a name you might be familiar with. Starting as a hip hop producer, moving towards Chicago House and finally ending into Romanian sound shpere, he gained recognition in 2017 when Seth Troxler played his edit of Kylie Minogue’s ‘Slow’. In 2018 he released his first EP at Basel based label ‘Studio 405’ releasing now a classic jam ‘Intr-o Zi’ played by many Romanian artists. That year he also won his first prize ‘The up and coming artist of 2018’ at the Sibiu DJ Awards. The year was completed by an appearance on Sang out of tune’s V.A. and a second EP on the same SOT label. 2019 was marked by the release of JOKER002 and the Nocturn series of parties that he hosted, sharing the booth with artists such, Herodot, Sepp Nu zau, Lizz or Prichindel. He begin to attend bigger parties like Alandala, and perform in some worldwide known clubs as Midi, Control Club, Club Eden or Club Guesthouse.
Vlad Bretan on Facebook