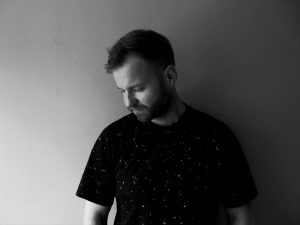 DJ & Producer from Riga, Latvia who claimed his position in electronic music world with 3 releases in 2019 while maintaining his ambitions for more in future. Prefers minimalistic underground sound with playful low frequencies, subtle and sometimes minor, middle range and glitchy loops. Always after new records and fresh sounds. Crew member of Underground Station crew that has gained local recognition in Riga with their parties. Released his music also on RAWAX and Welter Records
Valts Incis on Facebook

Our questions:
Tzinah Records: To start with, please, recommend us something to listen to while we go through this interview. It can be anything.
Valts Incis: To mix things up, I would say – let’s listen to The Lot Radio on Soundcloud, there’s always something fresh coming out.

Tzinah Records: Could you remember when and where have you felt it for the first time that you were to become a music artist?
Valts Incis: I know I was going to do something music-wise back when I was around 15, I did like electronic music back then, but it was mostly guitar lessons, attending choir at school and some experiments with Sony ACID Pro. I remember trying to put together my own version, let’s say remix, of Justice vs Simian – We Are Your Friends and Sony ACID Pro seemed to be a software from another planet, so it took a lot of time. I still might have the CD with that remix somewhere. Did few DJ gigs and it all faded away in my mid-twenties and came back 2 years ago when I started play as a DJ again and started to entertain the idea of producing and actually putting out my own tracks.

Tzinah Records: Why did you choose to create and play this particular type of music? Are there any artists that touched you deeply while developing your own style?
Valts Incis: I always more or less used to have few electronic music tracks in my playlist even back then when I was mostly into rock music and over time I figured that electronic music is touching me in a strong way and playing/creating that minimal/house kind of sound came naturally. I think most touching artists that influenced me over time are Boards Of Canada, Tycho, Moby, Royksopp with their vibe in early released music. I’ve always been into ambient, nostalgic, lo-fi, analogue sounding music.

Tzinah Records: Please, briefly, describe for us, the current state of the underground music scene in the place you come from. Is it any good?
Valts Incis: Riga, Latvia is very unique with it’s culture and history and, while there is so much going on simultaneously, I sometimes get the feeling that all of it is absorbing attention in a way that leaves not that much attention on underground music scene while keeping it as a small, warm circle where almost everyone knows everyone. It has some advantages and disadvatages, but I like it the way it is, to be honest.

Tzinah Records: Without giving out too much about your secret weapons, please tell us how does the magic work in your production routine. Software? Analog? What does your DJ set-up imply?
Valts Incis: I am not much into production gear at the moment, my gear consists of basic monitors, midi keyboard and PC full of recorded samples from wherever I go. I like to keep it simple. Speaking of routine, I like to start with creating a harmony, vibe using and filtering out some of the samples and then I build up on that. DJ set-up implies 2 digital decks, single vinyl deck and a mixer, simple as that, nothing fancy.

Tzinah Records: What are the aspects of your daily life that are influencing the shape and sound of the music that you currently make?
Valts Incis: I love driving, spending time in nature, reading, interviews and podcasts on YouTube and most of the time I have music playing in background so I would mostly be influenced by all of that together. Worshipping beauty all around through ears and eyes is what usually brings ideas.

Tzinah Records: Which underground house DJ or producer would you love to take out for a summer picnic? With which artist (from any music genre) would you spend 24 hours stuck in an elevator?
Valts Incis: I’d go out for a picnic with Unknown Milano label and wouldn’t mind being stuck in elevator with Spokenn.

Tzinah Records: What motivates you to be an active part of the underground movement?
Valts Incis: Love for the music I get to hear from my friends and guests from abroad.

Tzinah Records: What’s the story behind your Tzinah Family Podcast? How did you record it and are there released or unreleased tracks?
Valts Incis: It was a Sunday morning in February and I had a tracklist on my mind and I was just improvising with what I like most at the moment. A bit of unreleased material from friends and a blend of other tracks I love.

Tzinah Records: Are there any of your plans/upcoming projects that you would like to share with us? Where can we see you play next?
Valts Incis: I’m currently working on a batch of tracks that I hope to land this year and my focus is currently on that. Next gig soon at One One Riga with my Underground Station gang and friends.

Tzinah Records: Supposing you come back reading this interview in 10 years from now; could you try saying something to your future-self?
Valts Incis: Valts, I told you! :)