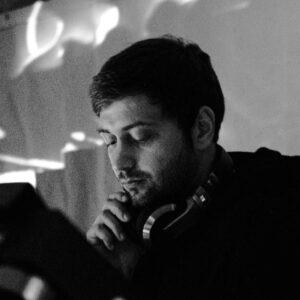 Lucide is an active artist on the underground scene in the past 3 years, he plays across different styles expressing trippy minimal & swanky sounds. Further, being label manager of Unknown Series he is promoting unique sounds, having musical adventures alongise many artists from the field. On his real name, Lucian Rosu was born in Piatra Neamt where he also decided to start his DJ journey and performed locally until 2011. Currently, he is based in Bucharest and quickly managed on making himself known as a DJ and producer on the underground scene after performing in many clubs and cities from Romania.
Lucide on Facebook

Tzinah: To start with, please, recommend us something to listen to while we go through this interview. It can be anything.
Lucide: Klaus Schulze – Euro Caravan from the Kontinuum Album(2007)

Tzinah: Could you remember when and where have you felt it for the first time that you were to become a music artist?
Lucide: I think the first time it was in the highschool somewhere in 2010, when I started playing in some small locations in my hometown in Piatra Neamt. Anyway as I had a serious break for 7 years from djing , this feeling strongly reappeared 3 years ago.

Tzinah: Why did you choose to create and play this particular type of music? Are there any artists that touched you deeply while developing your own style?
Lucide: Since I was a kid I’ve been in love with electronic music. Part of my family had a passion for this genre or was involved in the field. My father used to listen to old house and trance music and I was drawn to the sounds I heard. Also one of my uncle is music teacher and composer of clasical electronic music.He always inspired me a lot with what the artistic side can mean. The other uncle was in the past manager at the Rosu & Negru Club in Iasi so I had some early exposure with what a nightclub means.
Many artists have inspired me over time, but Klaus Schulze, Enigma and Vangelis have a deep rooted influence on me.
From the modern romanian generation I felt inspired mostly by the way that Raresh and Praslea express themselves on stage and very impressed by the sound of Amorf. Also I love the music produced by Arapu, Sepp, Direkt and many others.

Tzinah: Please, briefly, describe for us, the current state of the underground music scene in the place you come from. Is it any good?
Lucide: The Romanian underground scene has already shown that it can take everything to another level, so I consider it is the proper place I can be now and where I can develop myself.

Tzinah: Without giving out too much about your secret weapons, please tell us how does the magic work in your production routine. Software? Analog? What does your DJ set-up imply?
Lucide: I like to use both analogue and software. However on the analogue and instruments part I’m now experimenting with Moog Subsequent 37, Roland Tr8 s and Elektron Digitone.
My home DJ setup consists of 2 x Pioneer XDJ1000 MK2 and one Xone92 mixer.

Tzinah: What are the aspects of your daily life that are influencing the shape and sound of the music that you currently make?
Lucide: The sound and the shape of the music I like to play and the one I create mostly come from the desire to express a profound, intense and trippy state of mind and soul.

Tzinah: Which underground house DJ or producer would you love to take out for a summer picnic? With which artist (from any music genre) would you spend 24 hours stuck in an elevator?
Lucide: For sure Raresh would be that artists. He is a role model for me, an example of total passion and expressed modesty.

Tzinah: Have you already played in your most-dreamed about venue? Which one is that?ț
Lucide: To be honest I don’t have an exclusive one. The most dreamed venue is the one where people can be touched and feel something special from the music I play, leaving with good memories from the event.

Tzinah: What motivates you to be an active part of the underground movement?
Lucide: What motivates me the most is the desire to express a different and authentic energy. I also like more and more the process of discovering my artistic side.

Tzinah: What’s your favorite type of breakfast?
Lucide: Some vegetarian indian breakfast recipes and a white tea sounds perfect to me.

Tzinah: What do you do when the music is not playing?
Lucide: I’m working for my developer job, outings or meetings with friends and tv series from time to time.

Tzinah: What’s the story behind your Tzinah Family Podcast? How did you record it and are there released or unreleased tracks?
Lucide: The Tzinah Podcast has been recorded home on my Dj setup. It includes some unreleased and vinyl only tracks and also some released tracks for which I love the way they can build up my set and get the desired sound.

Tzinah: Are there any of your plans/upcoming projects that you would like to share with us? Where can we see you play next?
Lucide: The upcoming confirmed gigs will be in Focsani, Iasi and Bucharest. On the projects I would love to continue collaborating more with Octave and Andrei Voica and to continue growing the Unknown Series label alongside Nic Stoican who becomes an exceptional visual artist.

Tzinah: Supposing you come back reading this interview in 10 years from now; could you try saying something to your future-self?
Lucide: Never give up to my passions and to the specific intensity of how I feel about music!