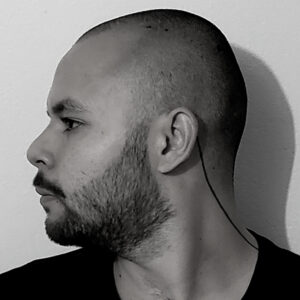 There seems to be a special aura that hovers over the city of Brusque, located near the coast of Santa Catarina. There is no consolidated dance music scene, but somehow the place has been the birthplace of new and promising talents, such as Filipe Rodrigues AKA Lipp. With a sensitive personality, he realized early on that music filled his voids and it was in the ‘golden era’ of Deep House in Brazil, shortly after 2010, that he began to cultivate a special affection for electronic music. “The only genuine friendship that I really consider is the relationship I have with music”, he says with an open heart. This sentimental side is even observed in his posture as a DJ, being concerned about the smoothness and delicacy in the mixing, making a clever blend of groove tracks among Minimal most complex beats. It is this main style that he adopts in his DJ sets, however there is always space for deeper and more romantic tracks, floating between Deep, House and Techno.
For at least five years, Filipe has been venturing into the music production field and has already produced some good releases. He joined the Odyssey Rec team, Antonela Giampietro’s label, released a remix on the Romanian label Welter Records and also signed the EPs “Apocalipse” and “Brava Green” on AIA Records, Aninha’s label, Brazilian artist who is one of his big references.
Paving his own road, he also dedicates himself to some side projects, being in charge of Índica Label, an initiative that started as a party and today works as a label record, with plans to go further, in order of bringing the main pillars of the brand cannabis activism, harm reduction and awareness through connection with music.
In the second half of 2021 Filipe starts signing as Lipp, with minimalist clothing in his tracks, he has already joined the team of labels such as Totoyov, a label he is a resident of. During his time at WAPM he had a remix signed by Vern on his EP, one of his references and he also accumulates passages through D’Praxe, Mellowdy and Neuter Records. By the end of 2022, Tzinah and Createch have already scheduled their debut. And it is so, carrying a singular lightness and seeking to promote the feeling of freedom in
those around him, that Lipp is enjoying every step of the process, unhurried, but always aiming for a promising future.
Lipp on Facebook

Lipp on Beatport
Lipp on RA
Lipp on Soundcloud