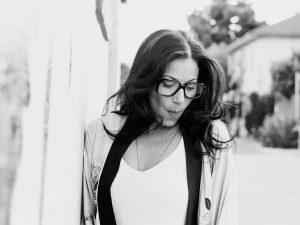 Growing up in New York, Danielle was first influenced by techno music in the late 90’s during a legendary era when dance music and club culture were rampant in New York City. Nightclubs like the Tunnel, Limelight and Sound Factory spawned an inspiration that she could not ignore and she began translating fifteen years of classical music theory and performance training into djing and production. She was immediately recognized as a forceful new talent in the industry and quickly found herself a dual residency in New York and Boston and a debut at Miami’s 2005 Winter Music conference.
Known for her unique minimalistic take on techno, Danielle’s presence as an artist can not be ignored. Intense bass and dark animated synths were sprinkled with percussive detail and idiosyncratic sounds. After first introducing her sound to clubbers in the U.S at venues like Cielo, Pacha and Nikki Beach, she began spreading her music globally. Since then Danielle has engaged techno lovers in cities all over the world and regularly gigs across Europe and North America. Despite a hectic calendar, Danielle finds her sanctuary in the studio and since releasing her first EP in 2008, has released records on countless labels including BodyParts, Little Helpers, Fantastic Friends, Monday Morning, Tzinah & What Now Becomes.

Tzinah Records: To start with, please, recommend us something to listen to while we go through this interview. It can be anything.
Danielle Nicole: Anything Grace Jones.

Tzinah Records: Could you remember when and where have you felt it for the first time that you were to become a music artist?
Danielle Nicole: There wasn’t one defining moment. It was gradual. I grew up in a family of musicians. My dad taught me how to read and write music and began giving me flute and piano lessons at a very young age. From childhood to high school, I was very involved with all the music programs in the community and performed with various bands and ensembles, and as a soloist; so music was always a huge part of my everyday life. As I got older, my musical tastes began to branch out and I started experimenting with different sounds and genres and I finally felt like I had come into my own as an artist and I just went with it. But there was definitely no plan!

Tzinah Records: Why did you choose to create and play this particular type of music? Are there any artists that touched you deeply while developing your own style?
Danielle Nicole: This is a hard question for me to answer and it really is a culmination of everything that I was introduced to musically from a young age, from jazz to disco to classic rock and beyond. I didn’t start experimenting with electronic music until my early 20’s, and since then it’s been 10+ years of developing and fine tuning my sound. It is always changing a bit too, because I am forever inspired and influenced by any artists and sounds that are new to me and speak to me.

Tzinah Records: Please, briefly, describe for us, the current state of the underground music scene in the place you come from. Is it any good?
Danielle Nicole: I’m from New York and underground music culture is definitely at a high point. When I was growing up there in the late 90’s/early 2000’s, the club scene was rampant, and I watched as it all crumbled to almost nothing. Manhattan completely died as a club scene, but slowly with everything moving to Brooklyn, New York is definitely back on the map as far a cities with a proper underground music scene. There are countless new venues, weekly after hours are back thanks to my good friends at Bushwick A/V and lots of new talent is being cultivated from there.

Tzinah Records: Without giving out too much about your secret weapons, please tell us how does the magic work in your production routine. Software? Analog? What does your DJ set-up imply?
Danielle Nicole: In the studio I am using both logic and ableton and the factory samplers in both programs are my go to. I love to create my own sample banks, then play everything out. It really helps me to get my ideas into the DAW. My set up is pretty simple, 2 controllers and an iMac.

Tzinah Records: Which underground house DJ or producer would you love to take out for a summer picnic? With which artist (from any music genre) would you spend 24 hours stuck in an elevator?
Danielle Nicole: See answer to question 1 ! haha

Tzinah Records: Have you already played in your most-dreamed about venue? Which one is that?
Danielle Nicole: Actually no. I’ve played at almost all the clubs in Berlin, but the one place that I have really wanted to play for as long as I can remember is Club Der Visionaire, but not yet. And most dreamed about would be Elysia in Basil.

Tzinah Records: What do you do when the music is not playing?
Danielle Nicole: When I’m not doing music, I’m most likely at work. I bartend at a cocktail bar here in Berlin, and I’m also working on opening up my own place eventually! Other than work stuff, you can find me anywhere outside, probably going for a long run, or spending some time in the park with my best buddy, my doggy, Little Mama.

Tzinah Records: What’s the story behind your Tzinah Family Podcast? How did you record it and are there released or unreleased tracks?
Danielle Nicole: I’ve been on a super duper late 80’s/early 90’s house music tip lately, so you may hear some of that influence in there, especially the last track which is straight 1989! I actually recorded the set with ableton and a controller. I am usually not djing like this, but I don’t have a proper set up in my flat, so I modified.

Tzinah Records: Are there any of your plans/upcoming projects that you would like to share with us? Where can we see you play next?
Danielle Nicole: I will actually head to NY this week and I’m playing at TBA in Brooklyn and Le Bain in Manhattan. My next EU gig is when I return to Berlin in July at Golden Gate.