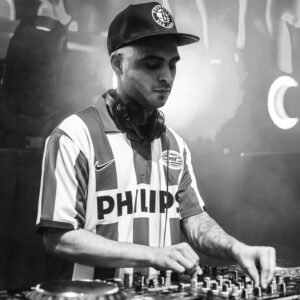 Baban real name Burak Baban is a DJ/Producer from Istanbul, Turkey. Since his childhood his passion to music has been intense and attented many festivals all around the world.Baban’s passion to music grew over the years and that lead him to start producing and DJing. His journey started as a club deejay in 2019 in his own city Istanbul, in the same year he decided to produce electronic music. Baban’s first EP release came out on Podvodo Records in 2020. Then, he had several EP’s releases from very well known labels such as Welter, Seism Productions, Zebra Records, Not Allowed, Habits Records, Odd Pleasures, Tzinah Records, Urban Midi ,Carpathian Sounds, Fafo Records and lastly Kiku Music.
He likes to combine minimal sounds with jazzy, breaky flavors some old school hip hop influenced in. His hypnotic and groovy sound keeps people dancing on the floor no matter what time is the night. Baban likes to deliver an unpredictable and harmonious journey and always tries to come up with futuristic sound.
He got lots of attention from the Romanian underground scene and some of his tracks have already been played by Sepp, Nu Zau, Gescu, Primarie, Prichindel, Direkt, Vern, Vlf and many more.
Baban on Facebook

.
.
Tzinah Records: To start with, please, recommend us something to listen to while we go through this interview. It can be anything.
Baban: Nas – Nobody feat. Ms. Lauryn Hill

Tzinah Records: Could you remember when and where have you felt it for the first time that you were to become a music artist?
Baban: I don’t have any specific time frame, but I was a big fan of electronic music since 2009 and after years of attending many festivals and listening to different genres have encouraged me to be a producer/DJ

Tzinah Records: Why did you choose to create and play this particular type of music? Are there any artists that touched you deeply while developing your own style?
Baban: I think everything started around in my college era. I was living in the United States and had been to many events in Brooklyn. After all, when I moved back to my own country I decided to be a DJ and after a few months my production journey started. I really enjoy the productions of Silat Beksi, Cosmjn, Lizz, Mihai Pol, Traumer, Janeret and many more..

Tzinah Records: Please, briefly, describe for us, the current state of the underground music scene in the place you come from. Is it any good?
Baban: I am from Istanbul, Turkey and I can easily say that the underground music scene is keep growing & improving here. Clubs used to open till morning time, because of covid the government decided to shut down music before 12, but there are some underground clubs that go till late time. Melodic Techno & Techno & Ethnic sounds are really popular here, but if you are lucky you can find some minimal & house events in the city.

Tzinah Records: Without giving out too much about your secret weapons, please tell us how does the magic work in your production routine. Software? Analog? What does your DJ set-up imply?
Baban: The magic usually starts around 1am and goes till morning time. I really like to enjoy producing music when it’s silent, dark and with no people around, I have to be alone and disconnected from the world. I use software to produce music and love to discover different vsts. Usually making loops with my headphones, when it’s arrangement time, I turn on monitors and start listening to what to add more or is it okay like this, checking all volume of the channels and making sure it’s ready to go.

Tzinah Records: What are the aspects of your daily life that are influencing the shape and sound of the music that you currently make?
Baban: positivity
Tzinah Records: Which underground house DJ or producer would you love to take out for a summer picnic? With which artist (from any music genre) would you spend 24 hours stuck in an elevator?
Sweely for summer picnic Ricardo Villalobos

Tzinah Records: Have you already played in your most-dreamed about venue? Which one is that?
Baban: Not yet, Sunwaves

Tzinah Records: What motivates you to be an active part of the underground movement?
Baban: Producing music all day long

Tzinah Records: What do you do when the music is not playing?
Baban: Sometimes its good to be on silent

Tzinah Records: What’s the story behind your Tzinah Family Podcast? How did you record it and are there released or unreleased tracks?
Baban: I was always listening their podcasts and decided to send one. Mostly released tracks, but 2 of them are not released yet.

Tzinah Records: Are there any of your plans/upcoming projects that you would like to share with us? Where can we see you play next?
Baban: I have lots of unreleased tracks so my first plan is to release them soon. One of my own production sets will be coming out soon, this was one of my goals when i first started to produce tracks. Gonna be playing some festivals this summer in Turkey and look forward to playing some other countries as well

Tzinah Records: Supposing you come back reading this interview in 10 years from now; could you try saying something to your future-self?
Baban: Be patient like always, the guard of a boxer never falls down!
.