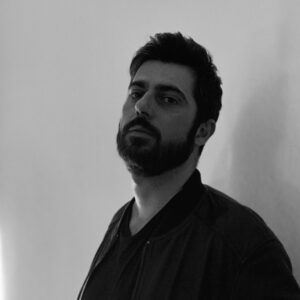 Deep love, dedicated passion, full determination and noteworthy club culture. With these features Morbidyne’s founder Vesy moves his first steps in electronic music scene. He starts his dj/producer career in 2010, based in Milan, where he shares the dj booth and the studio with Ricky Leo, co-founder of the duo Flatless. At the end of 2014, Gabri starts his solo career as Vesy. He starts traveling and visiting some of the world’s best clubbing scenes like Chicago, Detroit, Ibiza, Lisbon, Berlin, collecting gigs in small underground parties and bigger clubs like Spybar and Primary (Chicago), Kremlin (Lisbon), Drugstore (Belgrade) and Tipic Club (Formentera) to name a few. In Milan he uses to perform for the best underground parties in town, like ODD, Electronic Barbecue, Phoenix Room, Penny Royal and more.

Our questions:
Tzinah Records: To start with, please, recommend us something to listen to while we go through this interview. It can be anything.
Vesy: Hello from Vesy! I suggest you to listen to “The Smoke” by The Smile:

Tzinah Records: Could you remember when and where have you felt it for the first time that you were to become a music artist?
Vesy: It happened that time I made my first attempt in the console. Before being a DJ I used to be a party organizer along with Ricky Leo. After a party of ours we went back home with a bunch of friends as usual. That time he was too tired for playing and said: “Gabri, it’s up to you tonight”. It was my very first approach to the decks. Two or three tracks later I realized what was happening…I was starting being a DJ and I liked a lot.

Tzinah Records: Why did you choose to create and play this particular type of music? Are there any artists that touched you deeply while developing your own style?
Vesy: My music is a deep research of what I like more, it’s about my musical tastes and my background. It’s not easy, sometimes you do not express properly the mood you want, you feel your music has to be better, you feel it miss something to go straight to the point. It’s a constant personal growth you have to chase everyday.

Tzinah Records: Without giving out too much about your secret weapons, please tell us how does the magic work in your production routine. Software? Analog? What does your DJ set-up imply?
Vesy: I think a proper workflow is one of the most important feature related to studio time. Sometimes I start choosing one or two reference tracks, sometimes I leave it to the music to take me where it is pointing to. I start creating the track’s main loop, I build the drums pattern with drum machines, samples and low volume loops as a texture. For the bass lines I prefer to use synthesizers, I mainly use Roland and Elektron stuff. After the main loop is created I work on the first structure’s draft, in order to have different blocks where to remove instruments or add cool sounds and create melodies or the atmosphere I want to reach. Mixing and creative process usually goes together, I shape the single sound and I mix it with the others immediately after I add it to the composition. About the DJ set-up, I am starting over with the turntables but at the moment it implies CDJs, mixer and good selection.

Tzinah Records: Which underground house DJ or producer would you love to take out for a summer picnic? With which artist (from any music genre) would you spend 24 hours stuck in an elevator?
Vesy: Easy answer, she is asking for a picnic for so long! I am taking out my girlfriend Barbara, she is half of Babi & Gabri duo, we released the first EP on my label last year. About the elevator, If it is a time-machine elevator, I would spend 24 hours stuck in it with Bob Marley (I probably start over smocking weed).

Tzinah Records: Have you already played in your most-dreamed about venue? Which one is that?
Vesy: Not yet man! I am not saying which one or it is not going to come true!

Tzinah Records: What motivates you to be an active part of the underground movement?
Vesy: The underground movement charmed me since the beginning, when I was a clubber only. Then, since I started being a DJ, my will to give my contribution and my will to convey the values thaught to me, never run out. The unwritten rules, the respect for the DJ booth, the ways of doing, the passion you put in it, the mentality, the capacity of not to stop believing in your dreams. I think it is what makes the difference, what make you a great DJ or not.

Tzinah Records: What’s your favorite type of breakfast ?
Vesy: Sometimes on Saturday or Sunday I really like to wake up and have a salty breakfast with eggs, bacon, sausages and bread. Love it.

Tzinah Records: What do you do when the music is not playing?
Vesy: I feel so lucky I have the chance to work in the music field, not only as a DJ/producer but also as a director of an electronic music school in Milan, Wave Production Academy. Since we have opened I always have a lot of work, but who doesn’t want a recording studio at his disposal in his job place? About the free time, during the pandemic I began swimming and fitness. I am trying to be a “DJ sano in corpore sano”.

Tzinah Records: What’s the story behind your Tzinah Family Podcast? How did you record it and are there released or unreleased tracks?
Vesy: What a better occasion than my “Junipers Bloom In Autumn” album release next March on Tzinah, to record a DJ set in the studio. It has been a while without recording sets. You will find fresh new tunes and tracks from the recent past. I have just finished a huge work on my musical archives from 2017. It definetely helped a lot…Expect to listen to some more podcasts soon.

Tzinah Records: Are there any of your plans/upcoming projects that you would like to share with us? Where can we see you play next?
Vesy: I really want to go back to the origins and start my own party here in town, a little venue with a perfect sound system, inviting artists who have been keeping on inspiring my musical journey for years.

Tzinah Records: Supposing you come back reading this interview in 10 years from now; could you try saying something to your future-self?
Vesy: “Don’t stop man, keep on dreaming!”