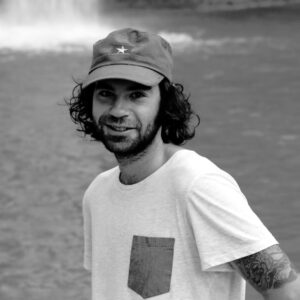 Born into a Turkish and Swiss family, music has long been a passion of Cem Sagisman aka Jemmi since his early teenage years. He was 14 when he heard his first piece of electronic music, the legendary tune ‘Body Language’ by Booka Shade and M.A.N.D.Y.. Ever since then his passion has been ever-growing, taking him to many festivals, genres and events around the world. When he moved to England he discovered a new world of music which had a massive impact on his understanding of music and inspiration. He was mostly inspired by the Detroit and Chicago sounds and also heavily influenced by the liquid DNB scene, and after his discovery of the Romanian sound, his ideas started to take shape for the future. Having been an avid collector of carefully selected underground music for years, the transformation of becoming a producer / DJ didn’t happen until the September of 2020 when he decided to take a leap with his passion and love for electronic music and thus embarking on a whole new journey of music. His first release followed shortly with Podvodo Records giving him his first chance to introduce himself onto the scene, and he has been growing ever since releasing tracks from recognized labels such as Tzinah Records, Zebra Records, H24 Musique,PhonicHouse1 Records, Not Allowed, Carpathian Sounds, Unclosed Music, Welter Records, Tranquil, Concept Records and a few more. Drawing from his earliest deep house inspirations, Jemmi has cultivated his own style of expression of dark and mysterious soundscapes that simultaneously resonate with his personality and in return create an intimate and genuine connection with his listeners.
Although still at the beginning of his career, Jemmi has already attracted interest from established names in the scene such as Giuliano Lomonte, Prichindel, Alexis Cabrera, Cosmjn, Sepp, Cally, Primarie, Vern, vlf, Costin Rp, Ted Amber, and many more….
Jemmi on Facebook

Tzinah Records: To start with, please, recommend us something to listen to while we go through this interview. It can be anything.
Jemmi: I recommend Heal Yourself and Move by Theo Parrish because it’s just so timeless and fits perfectly nearly with every moment.

Tzinah Records: Could you remember when and where have you felt it for the first time that you were to become a music artist?
Jemmi: I had the crave to make electronic for a long time, it been something that I wanted for years in my life, and when covid hit it was the perfect opportunity to start taking it seriously.

Tzinah Records: Why did you choose to create and play this particular type of music? Are there any artists that touched you deeply while developing your own style?
Jemmi: I remember when I heard my 1st piece of Romanian music, it was one of the Dinsubsoul Romanesc Series and it was one of the most different and unusual types of electronic music I had come across before. I was instantly interested, and the timing coincided with me starting to produce so it was meant to be in a way.

Tzinah Records: Without giving out too much about your secret weapons, please tell us how does the magic work in your production routine. Software? Analog? What does your DJ set-up imply?
Jemmi: I don’t have a specific routine at the moment but the most creative moments come at night time when there are no distractions. I use Ableton, and I stay up to date using the many vst’s, and M4L devices in offer, and I also own a Korg Monologue synth which I’ve started using a lot more lately.

Tzinah Records: What are the aspects of your daily life that are influencing the shape and sound of the music that you currently make?
Jemmi: I’m all the time listening and discovering new music as well as listening to my all time favourites and I think this is what helps me shape my sound.

Tzinah Records: Which underground house DJ or producer would you love to take out for a summer picnic? With which artist (from any music genre) would you spend 24 hours stuck in an elevator?=
Jemmi: I think I’d take out Cosmjn for a summer picnic as I’d love discuss production and general music with him, and if I were to be stuck in an elevator for 24hours with an artist that would be Nina Kraviz.

Tzinah Records: Have you already played in your most-dreamed about venue? Which one is that?
Jemmi: No I haven’t yet :) venue wise it would be the legendary Club der Visionäre in Berlin, and festival wise of course it’s Sunwaves

Tzinah Records: What motivates you to be an active part of the underground movement?
Jemmi: Whenever I discover a great track whether it’s an old or newly released track, which resonates with something in me. This feeling which I can’t truly put into words is my motivation to create something of my own.

Tzinah Records: What’s your favorite type of breakfast?
Jemmi: I prefer to skip breakfast but if I was living in the right country it would be tropical fruit breakfasts everyday.

Tzinah Records: What’s the story behind your Tzinah Family Podcast? How did you record it and are there released or unreleased tracks?
Jemmi: I recorded the podcast with Pioneer CDJ’s and a Xone 96 mixer. I included a couple of my recent own releases, as well as some tracks from my friends and some of my recent and past favourites.I also included tracks from old and upcoming Tzinah releases from Baban and Cata, and also a track from label boss Primarie.

Tzinah Records: Are there any of your plans/upcoming projects that you would like to share with us? Where can we see you play next?
Jemmi: I’m planning on doing more and more productions, which will create an opportunity to do an unreleased own productions set of my own in the future. I’m also planning to be more and more in Budapest where I’d like to play events and share my music on a regular basis.

Tzinah Records: Supposing you come back reading this interview in 10 years from now; could you try saying something to your future-self?
Jemmi: Never give up on your passions in life and keep on pushing but be patient whilst you enjoy the ride !