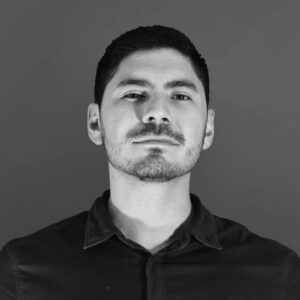 With more than 10 years of experience in the music industry, co-owner of the chilean label Agua y Sed and more than 200 songs released by different international labels, Javier stands out in the Chilean house scene with his constant flow of releases. His sets will invite you to immerse yourself in groovy, fresh and original sounds.
Javier Labarca on Facebook

.
.
.
Tzinah Records: To start with, please, recommend us something to listen to while we go through this interview. It can be anything.
Javier Labarca: Lets go with Prince “Piano & A Microphone 1983” Album. This one is one of the albums I´ve listened to the most this last couple of years.

Tzinah Records: Could you remember when and where have you felt it for the first time that you were to become a music artist?
Javier Labarca: I´ve been creating music since I got my first guitar at 10 or something like that. So it´s been pretty natural. One thing that changed was the belief that it was either a “normal job” or music only. Now I´m enjoying life with both in my life.

Tzinah Records: Why did you choose to create and play this particular type of music? Are there any artists that touched you deeply while developing your own style?
Javier Labarca: One thing lead to another and now I´m writing this :). I don´t know if I really made a conscious decision at one point, but it was a mixture of things that happened. An important one was working with the other half of Agua y Sed Label, Claudio Solis. He has always showed me new music and he was really into the minimal, micro scene. Working together kind of got me involved in that mood and i felt really comfortable creating this kind of beats.

Tzinah Records: Please, briefly, describe for us, the current state of the underground music scene in the place you come from. Is it any good?
Javier Labarca: I´m from Chile, so the culture here loves their latin styles of music, “reggaeton” specially. The electronic music scene is small but the last couple of years it was growing a lot. I think it´s going to keep getting better after this pandemic thing.

Tzinah Records: Without giving out too much about your secret weapons, please tell us how does the magic work in your production routine. Software? Analog? What does your DJ set-up imply?
Javier Labarca: I´ve always worked inside the box mostly so nothing fancy about that. I think the magic happens because I love sitting down and making music. Creating sounds, patterns, loops, Learning techniques, you name it. (I´m obsessed). What experience told me is that I just need to finish songs though. I kept to many unfinished songs too many years and now i try to finish every idea that i have.

Tzinah Records: What are the aspects of your daily life that are influencing the shape and sound of the music that you currently make?
Javier Labarca: Everything that happens to you shapes you. I think I´m a positive guy so that feeling is always gonna be part of my music.

Tzinah Records: Have you already played in your most-dreamed about venue? Which one is that?
Javier Labarca: A few years back, all I wanted to do was play in a club here in Santiago called “La Feria”. It was my go to when i wanted to party. It took me a while to make it happen but I took my chances and became a regular before the pandemic started. I was also invited to play in the local version of Creamfields but they cancelled it :P. We´ll see what the future holds, but work and good vibes are key to keep dreams coming true.

Tzinah Records: What motivates you to be an active part of the underground movement?
Javier Labarca: I became part of a community that has given me a lot of opportunities. I´ve met so many good people and made many friends. This is my life and i want to keep on having fun :)

Tzinah Records: What do you do when the music is not playing?
Javier Labarca: Enjoying life with my girlfriend.

Tzinah Records: What’s the story behind your Tzinah Family Podcast? How did you record it and are there released or unreleased tracks?
Javier Labarca: I recently released my first album as an artist with Tzinah so I want to keep on developing the relationship. This is a set with only unreleased tracks that I produced the last couple of months. Thanks Dan for the opportunity ;)

Tzinah Records: Are there any of your plans/upcoming projects that you would like to share with us? Where can we see you play next?
Javier Labarca: My next gig is here in my studio :P Freaky times we are living. Now I´m focused on creating music, later i´ll see what I can plan with that work.

Tzinah Records: Supposing you come back reading this interview in 10 years from now; could you try saying something to your future-self?
Javier Labarca: Keep trying your best :)