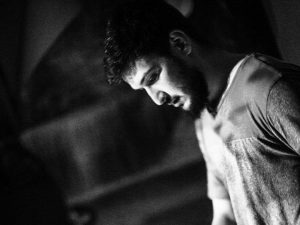 The experience while you listen him playing or you hear his track beeing played is bizarre. His early discovery and love for music was in 2016 when he realized that is very deeply attracted by sound. Till then he been practicing and learning on how to use softwares, drum machines and synthetisers. Bizar’s first appearance was in Romania 2016 along great peeps like Mihai Pol, Vid, Charlie, Raltz and other more. Being inspired by local artists like Barac, Raresh and producers of all around the world, he develops a style of micro minimal well puzzled and bizarre in the same time, of course. He released albums as Bizar with Hubble Recordings, Deck 1264 Records and more others V.A. Compilation albums. Stay up to date for more of his work, new projects coming up and good energy!
Bizar on Facebook

Tzinah Records: To start with, please, recommend us something to listen to while we go through this interview. It can be anything.
Bizar: Pachanga Boys – Time

Tzinah Records: Could you remember when and where have you felt it for the first time that you were to become a music artist?
Bizar: When I was a teenager, I think 13 y.o. I used to own these homemade radio stations for gaming, basically I was playin music for the players.

Tzinah Records: Why did you choose to create and play this particular type of music? Are there any artists that touched you deeply while developing your own style?
Bizar: I just felt for this kind of music and energy. There are a lot of artists that I’m following at the moment.

Tzinah Records: Please, briefly, describe for us, the current state of the underground music scene in the place you come from. Is it any good?
Bizar: Basically, I’m from Bacau and I think we all had the chance to listen to our beloved artists coming from my city 😊.

Tzinah Records: Have you already played in your most-dreamed about venue? Which one is that?
Bizar: I been playing in a lot of nice places around London, warehouses, naturea areas and boats.

Tzinah Records: What do you do when the music is not playing?
Bizar: Live.

Tzinah Records: What’s the story behind your Tzinah Family Podcast? How did you record it and are there released or unreleased tracks?
Bizar: There is a variety of both, yes. I hope you guys will enjoy it.

Tzinah Records: Are there any of your plans/upcoming projects that you would like to share with us? Where can we see you play next?
Bizar: At the moment “we are all in this” so there is no upcoming event that I can let you know about but in the future I hope I’m gonna come back with good news.

Tzinah Records: Supposing you come back reading this interview in 10 years from now; could you try saying something to your future-self?
Bizar: The more bizarre a thing is, the less mysterious it proves to be.